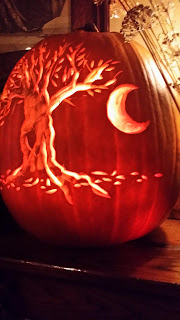 Pumpkins from here to there

An old farm truck bumps along the dirt road alongside a field, edged with sunflowers, where gleaners pick tomatoes for the local food pantry. We make a turn into the woods and come out at a corn field, then drive up a hill to the pumpkin patch.
Doug Race, third generation of the four-generation Race Farm in Blairstown, NJ, tells about pumpkins planted on high ground to protect from flooding rains, how a best patch, like this one, is set in virgin soil not yet infected with phytophthora, a disease that attacks vine plants.
The first row we walk matures jack-o-lantern pumpkins, their thick skins and deep ribs baking in the sun, turning the bright orange prized by pumpkin carvers. A few rows over, tan-colored cheese pumpkins ripen their heavy, dense fruit of fine textured meat that’s right for baking and cooking.
These pumpkins are destined for the Monroe Farmers Market in Stroudsburg, PA.

*********************************************************************
Using a squat, tan-colored pumpkin from the farmers market, Chef Nicola Mersini, owner of Momento Restaurant in Stroudsburg, PA, prepares a traditional pumpkin ragout from Tolino, Italy.
Before getting started we split a bottle of mineral water at the granite bar of Momento, where Chef Nicola tells of learning French-infused Italian cooking in the Piedmont region of Northern Italy. Bordering Switzerland and France at the base of the Alps, Piedmont possesses a sophisticated culinary tradition, one so apparent in Chef Nicola’s work and philosophy.
We begin the dish in the herb garden, where Chef picks fresh sage. Minutes later, at the range, a copper sauté pan heats on the fire. Chef peels and cuts the pumpkin, exposing its brilliant orange flesh, and after putting butter and oil into the pan, adds sliced garlic and slivers the sage; the pumpkin and herb go in next. Pumpkin loves garlic! he exclaims. The pumpkin slowly browns as he makes clear there is a conversation going on between the ingredients. The flavors change shape, some come to the forefront, some recede.
He adds consommé and simmers, in the meantime boiling goat cheese ravioli infused with lemon. The ravioli is tossed into the pan with sweet butter, and the dish comes together simmering under a lid. Once plated, Chef Nicola grates dry Sicilian Ricotta on top and drizzles a little olive oil to finish.
The pumpkin is firm, tender and meaty. The powerful flavors of sage and garlic are tamed to background notes, while the sauce works with the goat cheese ravioli to make this a well-bred dish, just the thing for fall and winter. 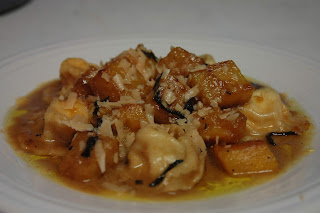 Toss the Pumpkin with a sprinkle of salt and pepper; set aside.
Slice garlic and sage; set aside.
Heat a non-reactive pan over moderate heat, add 2 Tb olive oil and 1 Tb butter. Add garlic and cook a few moments, then add pumpkin and sage, sprinkle with sugar, and lightly brown the pumpkin, 6 to 7 minutes. Add consommé and simmer 10 minutes.
Boil the ravioli 1½ minutes, drain and add to the pumpkin along with 2 Tb butter, cover and simmer 2 minutes.
The sauce should be lightly thickened. Plate the pumpkin and ravioli, grate cheese over top, and drizzle with 2 tsp olive oil.
Posted by kevroy at 3:32 AM

kevroy
Everyone is my superior in one way or another.